Yes, yes, I know...everyone's talking about COVID-19--or "coronavirus" as many have taken to (generically) calling it. But hey, I want that sweet, sweet SEO traffic.

To start with the obvious question, no, there are (so far, as of this writing) cases of COVID-19 in the Czech Republic. Indeed, as of yesterday, almost all of Central and Eastern Europe was still unaffected.


Prague is very much a tourist destination, with thousands of visitors a day, but somehow, both it and the country as a whole have yet to report a single case. Of course, governments at every level, as well as schools and other public institutions, are trying to walk that fine line between making sure people take basic precautions and freaking them out over something that seems less fatal than the flu, if more infectious.

Of course, Czechs have a theory as to why, so far, their nation has proved immune:

As I wrote about waaaaay back in March 2018, slivovice is the national booze of the Czech Republic. A highly alcoholic, distilled plum brandy, slivovice is still widely considered to have positive health benefits, especially for things like colds, sore throats, and the like. As anyone who has ever had a hot toddy can attest, you certainly feel better after a little liquid cheer. And since cold/flu care is mainly supportive care and not curative, why not? One student told me that she took a shot of slivovice every day during cold and flu season, just to be safe. The notion that the Czech consumption of slivovice is keeping COVID-19 at bay has even been meme-ified:

Coronavirus: I'm going to come and infect the Slavic nations.

The Slavic Nations answer with the picture, which says "Slivovice: no, that's not gonna happen."

Or, for somtething simpler, and in English, try this meme: 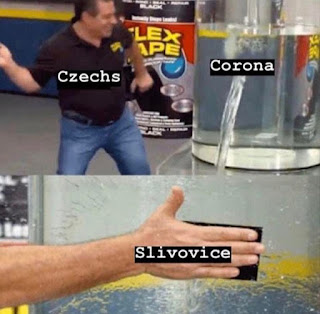 The thing is, I can *never* quite tell if Czechs are ironic or not about their stated belief that slivovice will cure what ails you. On the one hand, they're a highly educated nation full of brilliant people; on the other, they say it a LOT.

So far, then, the only palpable effect of COVID-19 for most Czechs is at the supermarket, where store shelves are being picked clean as some Czechs worry about possibly not being able to buy food in a full-scale pandemic. Canned goods, frozen foods, flour, and pasta--lots of pasta--were all scooped up. 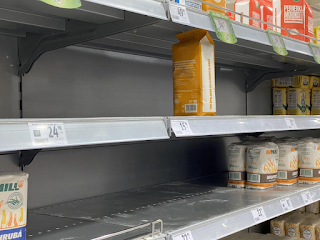 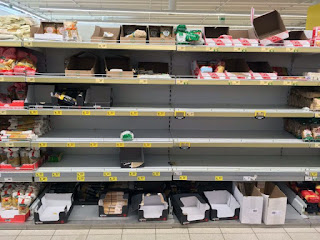 Even at my own Lidl across the street I notced a lot of bare spaces where penne and fusili usually live. Fortunately, it's Italian Week, so there were plenty of other pasta options. I did notice one woman buying much, much more food than I have ever seen a Czech person buy, but otherwise, everyone else was buying normal quantities. My guess is that a fairly small percentage of people are the ones hoarding food. The head of the retail association said there there was still plenty of food in the country, and all the major chains said they could easily handle the uptick in demand. Of course, this seems patently ridiculous, but, given that 30 years ago the country was still a communist autocracy and food wasn't always plentiful...I'm willing to cut folks some slack.

Things I haven't seen yet: Czechs wearing facemasks as they go about their lives; people raiding pharmacies for medicine; people avoiding going to public gatherings or using mass transit. In short, as the COVID-19 ends its second full month as the number one news story in the world, life in Czechia is proceeding much as normal. Who knows, maybe it *is* the slivovice.

Stay safe and sane, everyone. 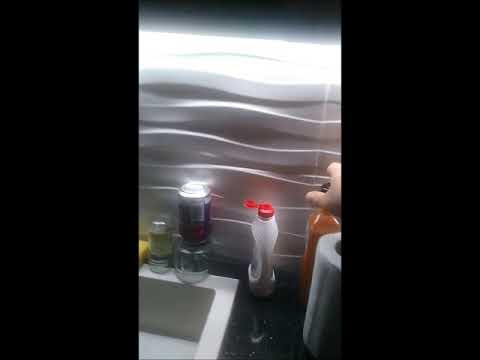